“I was charged with retail fraud and I hired a lawyer that I met when I was in court. He charged me $1000 and had me enter a plea. As soon as I left the court, I just knew in my gut that something was wrong. I found Loren Dickstein and talked with him a couple times. I decided that he could help me and I hired him despite already spending money on the other lawyer. I figured that even though Loren was a little more expensive, my reputation, criminal history and the possible sentences were just too important to stick with the guy who sold me out in court on the day of my plea.”

“Loren filed a motion in the court and got the prosecutor and judge to agree with a sentence that keeps the case off my record and will save me a lot of time and money while on probation.”

“It was terrible to have to hire a second lawyer but in the end, it was totally worth hiring Loren Dickstein to help me. I would NEVER use any other lawyer for anything!”

“I can be a witness to Mr. Dickstein being a fighter. He has something in him that a lot of other attorneys I’ve dealt with don’t have. He is sincere and shows a great deal of compassion and concern. I would recommend him to anyone that is seeking counsel.”

“Mr Dickstein represented me in a federal case. I had hired another attorney who didn’t return calls or seem to care about my case. They had also told me to expect about 5 years. I found Mr. Dickstein on AVVO and switched to him. My final verdict was for 1 day and 2 years of supervision. Throughout the entire process he always kept me informed of what was going on and tried to keep my spirits up. At the same time he was always upfront about things and didn’t try to sugar coat things, just to tell me what I wanted to hear. If you want an honest lawyer who is going to be straight with you, but at the same time work his butt off defending you, your first and only call should be to Mr. Dickstein.”

“I used Loren Dickstein recently as my lawyer in marijuana case in Southfield, Michigan. He did a great job. Other lawyer’s I’ve used don’t return calls or make promises they cannot keep. Loren always returned my calls, listened to me when I wanted to tell him something and delivered on what he said he could do for me. I also referred him my brother on a case and he is doing a good job for him as well.”

“My family was low on money and moving out of Michigan to another state where my wife found better employment. A couple weeks before me, my wife and two kids were supposed to move, and out of desperation, I made a false insurance claim to try and make some quick extra money. I was caught and immediately charged with a felony. I knew of Loren Dickstein because he had represented a couple of my friend in the past and gave him a call on the weekend. He got right back to me and agreed to take my case. The amazing thing was that my case was with a really tough county prosecutor’s office and got them to reduce the charge to a misdemeanor really fast and then got the judge, who loves probation, to just give me a fine and let me move with my family. My wife was going to divorce me if I was not able to move with them because of what I did. Loren literally saved my marriage, kept a felony off my record, saved me a ton of money in fines and costs, kept me from having to fight for my children, and kept me out of jail and off probation. Wow! I thank him so much.”

“Loren represented me in a case where I was facing three charges, two of which happened to be felonies. Loren walked me through step by step on what to expect. When the case went to court Loren knew exactly what to do, after he spoke with the judge my case was taken under advisement. I was instructed by the judge to stay out of trouble for 6 months and my record would be expunged. Not only did Loren help ensure that I would have a second chance, he taught me that life is about choices which since that day twelve years ago I have learned to make much better ones. Thanks again Loren.”

“He is very aggressive and did a great job on my case. I was being prosecuted for embezzlement from my employer. My plan was just to plead guilty and throw myself upon the mercy of the court and I wanted to hire a lawyer to help me get a better sentence. Mr. Dickstein took a different approach and told the prosecutor that we were going to trial if I didn’t get a plea bargain. Since I did it, I didn’t think that was going to work too well but I believed in him. At the pretrial in circuit court, the prosecutor offered a misdemeanor and now I don’t have a felony record. I truly never thought that would happen. If it hadn’t been for his preparation, legal knowledge, and reputation in that court, I believe I would not have gotten a plea deal. In truth, I think the prosecutor just didn’t want to go up against him in trial even though it was a strong case but I don’t know that. Either way, I would never use another lawyer and I will tell everyone I can how he helped me.”

“Randy saved my life. I was charged with 4 very serious felony counts including assault with intent to murder and 4th degree habitual for a shooting that took place in Pontiac. I had just served 8 years in prison for my role in a highly publicized armed robbery/murder case. The prosecution was out to get me and get me bad. They had eyewitnesses, the victim whom was shot in the head made a exited utterance when they were putting him in the ambulance that i was the one that shot him. couple that with they put highly respected and successful prosecutor Donna Pendergast to represent the state. Randy just crushed the prosecution’s case. from just ripping the key witnesses to shreds on the stand. to making the pontiac police look foolish. all in a very respectable way. His closing argument was just awesome. keep in mind this was 12 years ago he was a young attorney going up against a top notch big gun prosecutor that had only lost one case in her career. I cant just imagine after years of experience how great he is now. And I say take it from someone whose dealt with the system since I was 12 years old. Don’t sell yourself short with some smooth talking sell out lawyer that will just look to plead you out and is afraid of the prosecution and judges. go with Randy and also his partner Loren is great.”

The one redeeming quality of the legal system is Loren Dickstein. If anyone has been involved in the legal system, you know how awful it is. When a police witness lies, everyone pretends they are being truthful even if the testimony is obviously untrue. From what I’ve seen, judges care more about getting re-elected and protecting law enforcement than doing what is right. The only person who stood up and spoke for what was right, was Loren Dickstein. When it seemed like everyone was against me, he stood up for me and tirelessly fought to defend me and bring out the TRUTH. I’m very unhappy about people lying and forcing me to go through the courts but I’m incredibly happy that Loren was by my side. I can’t imagine what it would have been like to have a lesser attorney.

Mr. Lewis provided me the best opportunity to win my criminal case. I was charged with a misdemeanor (assault) and the facts were based solely upon “he said,she said”. This matter went to trial and I was found not guilty by a jury of 6. Mr. Lewis’s hard work and dedication to my case was clearly the difference in me being found not guilty. I would recommend his service to anyone that is facing any criminal charges. My family and I thank you for all that you did.

I have no criminal record until this incident, but with the help of Mr. Dickstein and his team, I continue to have a clean criminal record. I am in my final year of pharmacy school so I could not risk going with anyone but the best. I had read great reviews about Mr. Dickstein and know from a past experience of a relative that he is one of the best lawyers. He was able to get my charge of an OWI down to careless driving! I was not expecting such great outcomes. Either an impaired driving charge or reckless driving at best is what I was expecting, but thrilled that we were able to get careless driving with a non-reporting 12 month probation period. Though the lawyer fees were on the high end, I do not regret my decision to hire Loren. With my career on the line, I could not take any chances. Loren is very intelligent, efficient, and to the point. He really knows what he is doing and I would definitely recommend him to anyone in need of a lawyer.

Here is a small sampling of correspondence from prior clients.  These have been posted with the consent of the clients. (Click to Enlarge) 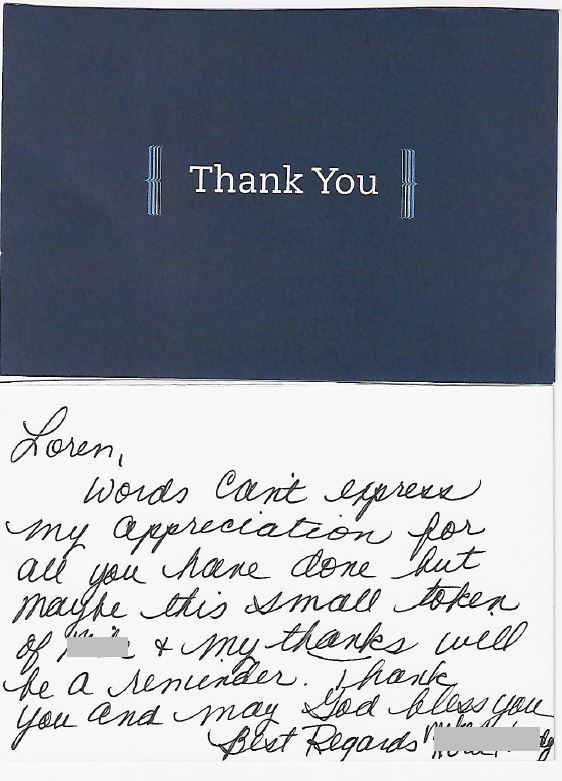 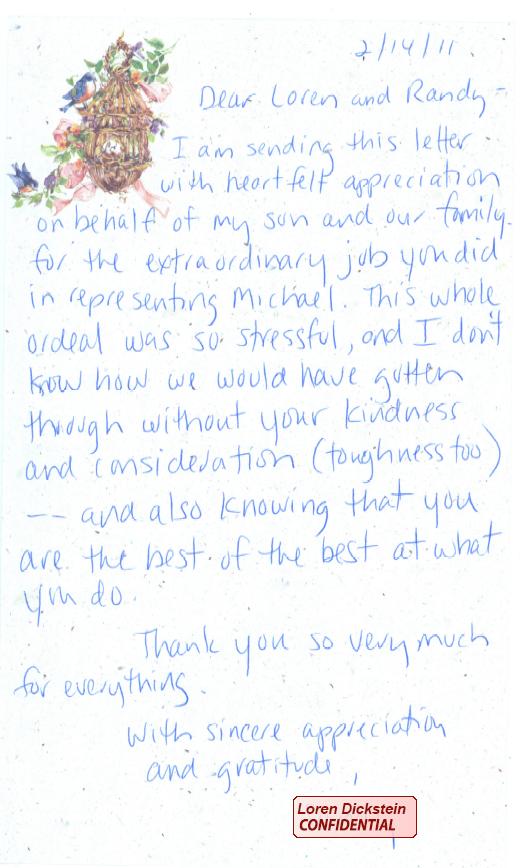 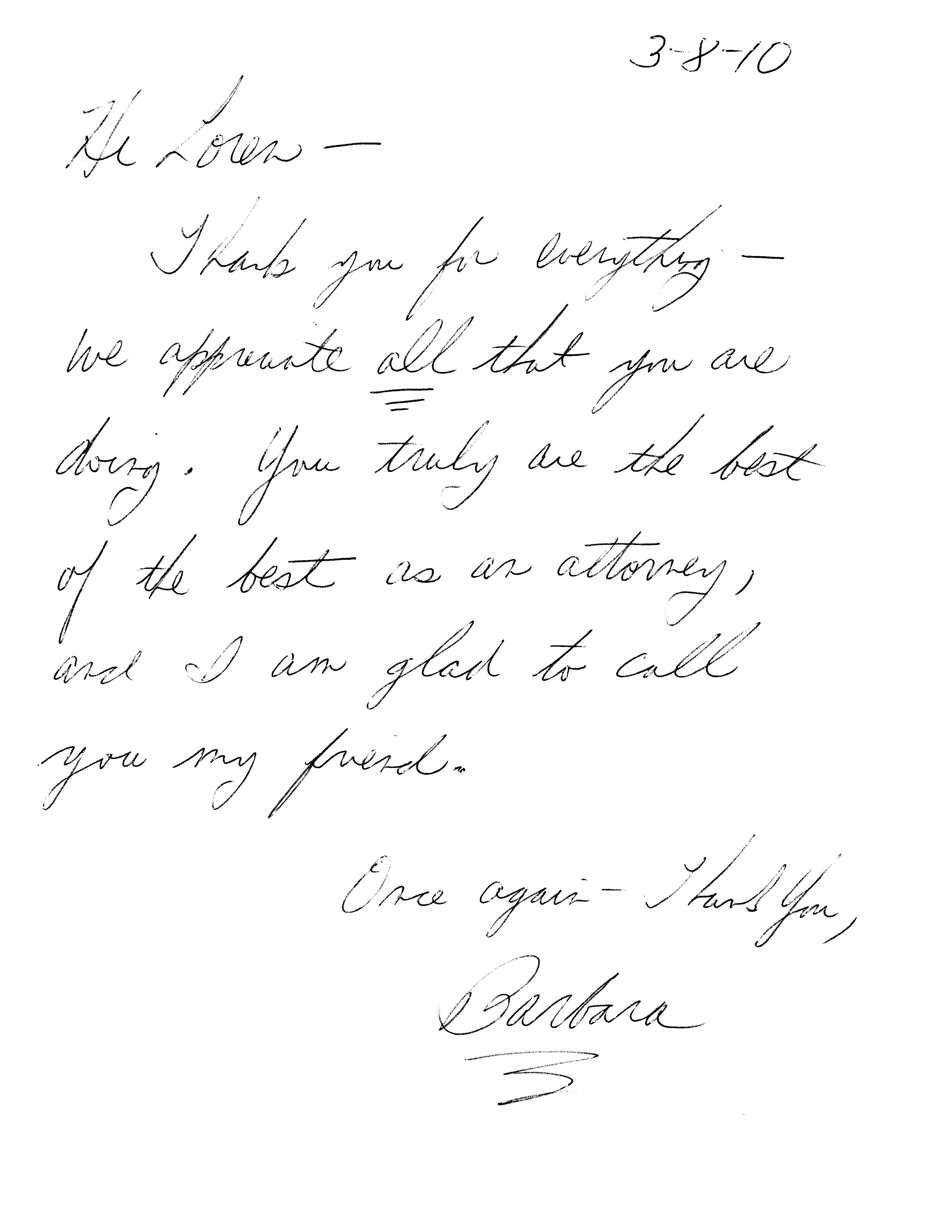 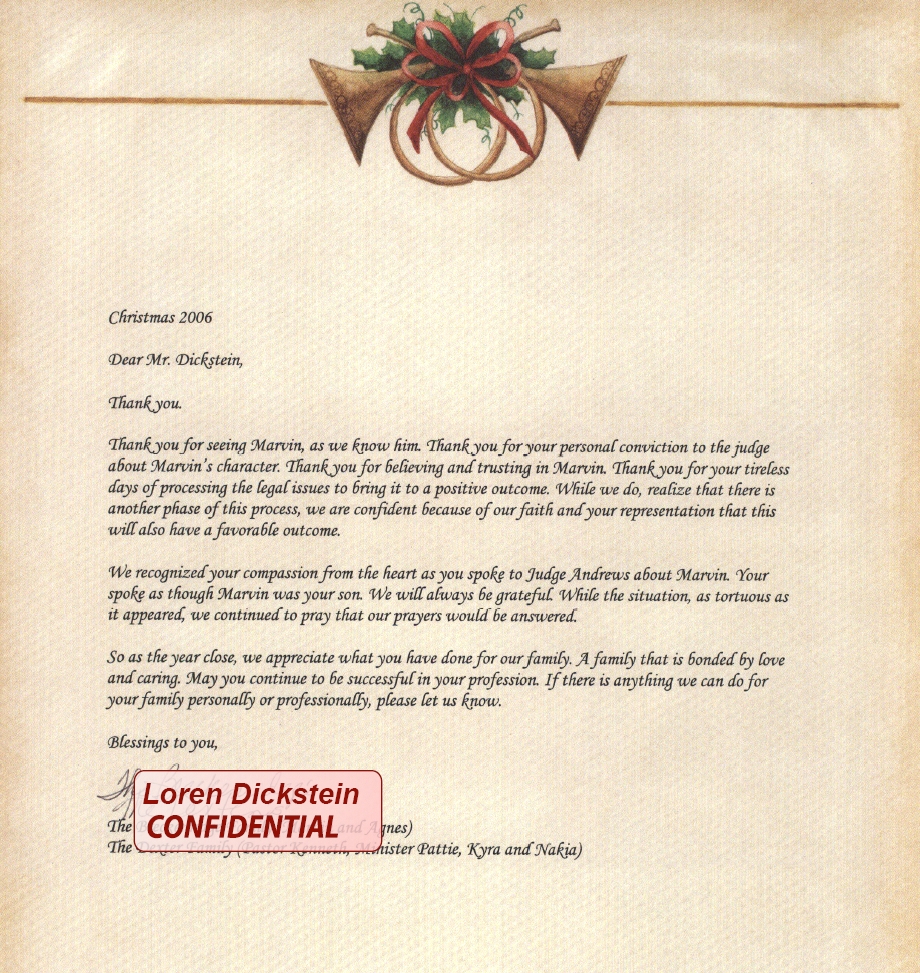 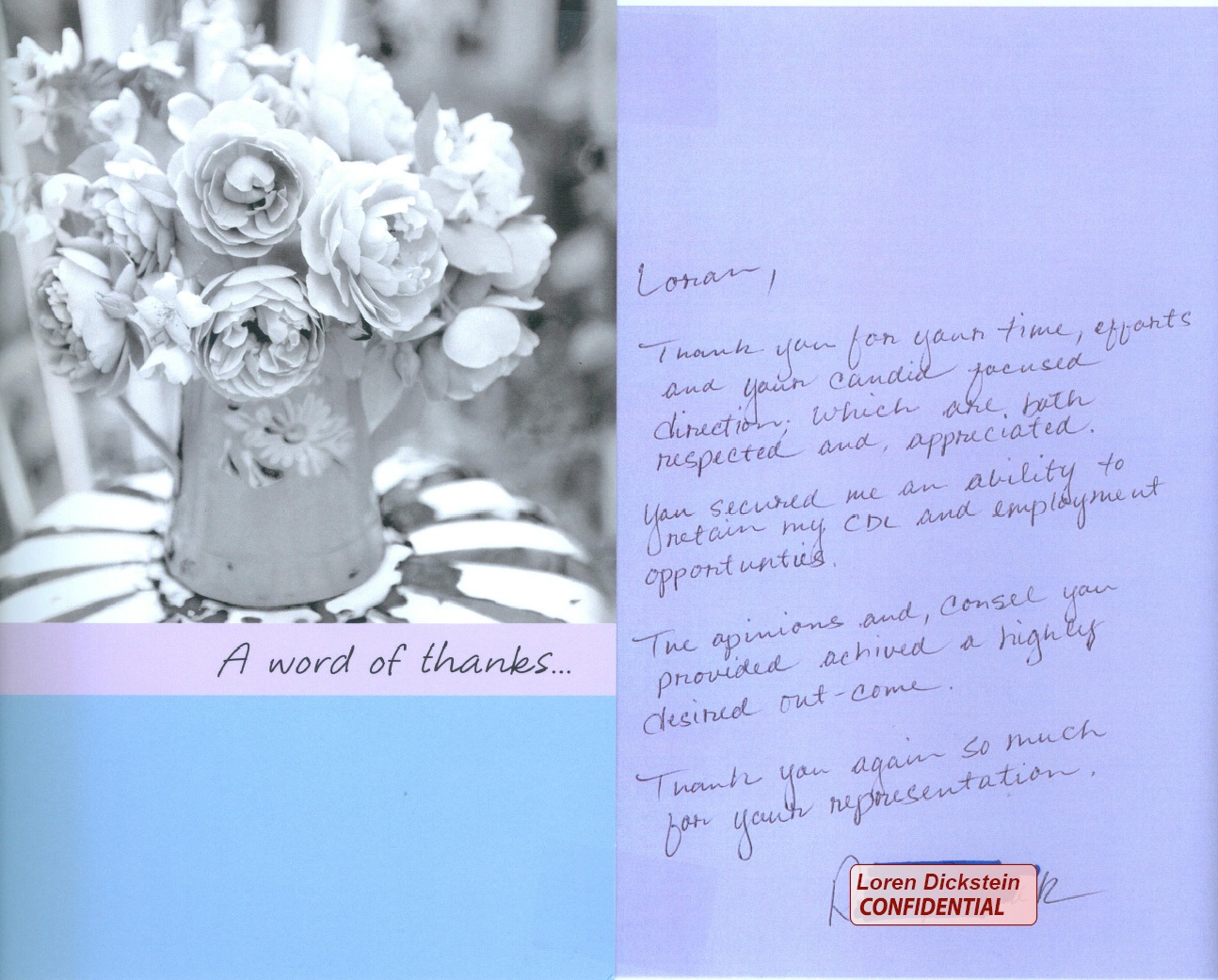 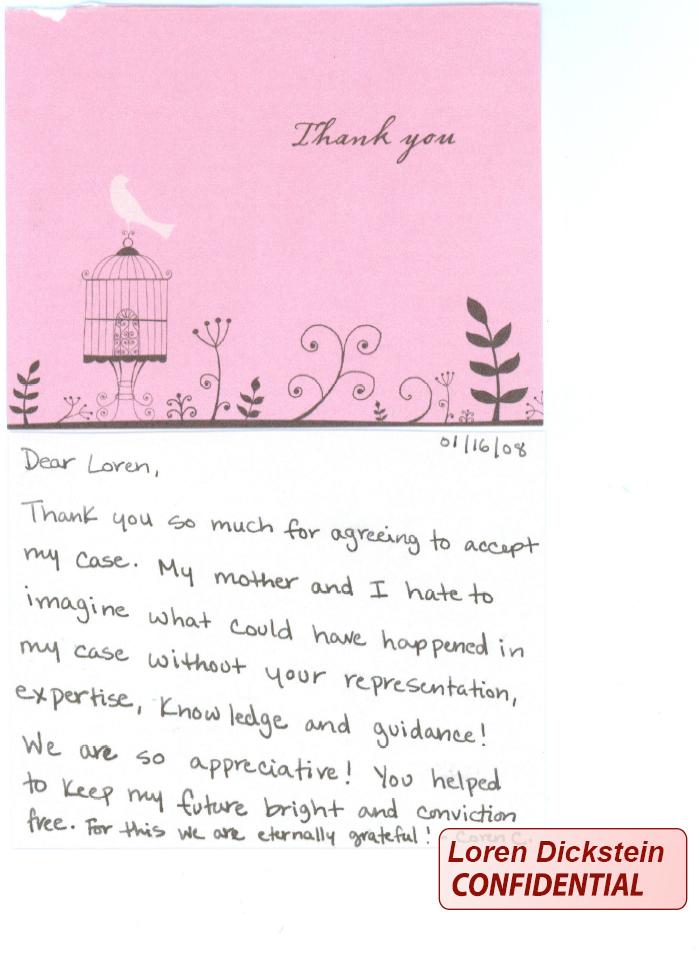