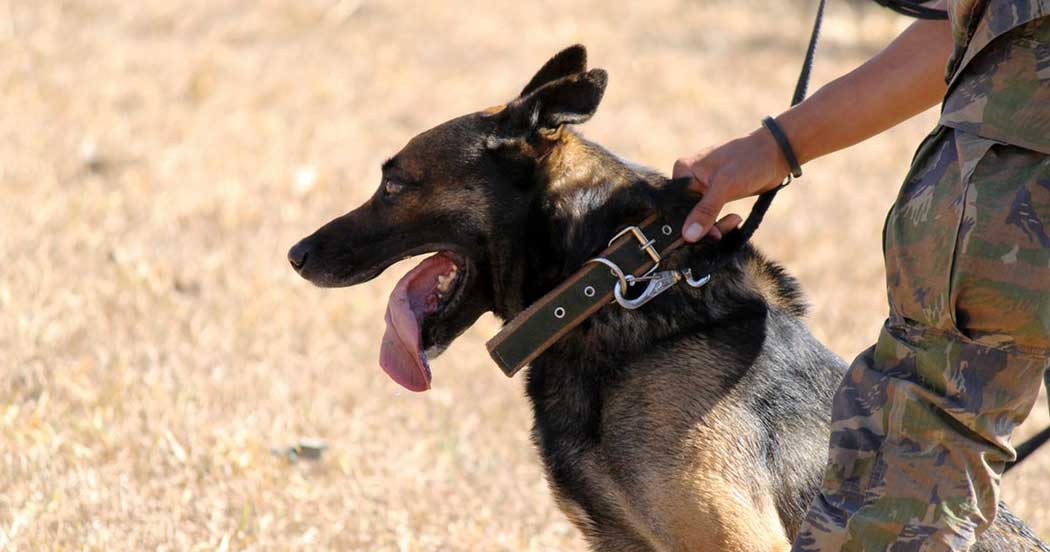 Dogs and humans have worked side by side for thousands of years. Modern training methods have capitalized on the special human/canine bond and dogs have become an integral part of many people’s lives, not just as companions, but also as guide dogs, search and rescue dogs, and bomb and drug sniffing dogs. Police and military dogs are the animals that are asked to give the most of themselves.

Police in most major cites use police dogs to track criminals, sniff out illegal materials, search buildings, locate lost people and many other things. These dogs do many things that human police officers cannot do as well as they can.

Dogs have an amazing sense of smell. Their sense of smell is almost 50 times more sensitive than a human’s. A dog can sniff out people, drugs, weapons, and bombs in situations where a human officer would miss them completely.

In addition to having a sensitive sense of smell, the dog’s nose is picky. Where we would smell beef stew, a dog would smell carrots, onions, potato and beef. There was an incident where drug smugglers wrapped the drugs in perfume soaked towels and the dog found the drugs anyway.

Also, a police dog can serve as a deterrent to physical confrontations between police and criminals. Often the mere presence of a growling German Shepherd can prevent a criminal suspect from running or fighting.

The Right Dog for the Job:

The majority of police dogs are German Shepherds. However, Labrador Retrievers, Bloodhounds, Belgian Malinois, or even Beagles are used depending on what the task they are needed for. The key attribute a dog needs to be a police dog is intelligence, aggression, strength and a sense of smell. Most police dogs are unneutered males so that they maintain their natural aggression. This aggression must be kept in check with thorough and rigorous training.

Police dogs come from various sources. Many police departments import dogs from Europe. These dogs have advantages over American bred dogs because the breeding standards are very strict. Before the dog comes to the United States it has already gone through rigorous training and earned an international certification. The drawback is the cost of shipping the dog to the United States. However, a well trained dog can pay for itself with the work it does – especially in drug sniffing.

Only the most dedicated police officers are considered to be a K-9 handler. This position is for the working life of the dog (often 6 years). When a dog is retired from police work it will often stay with its handler’s family. 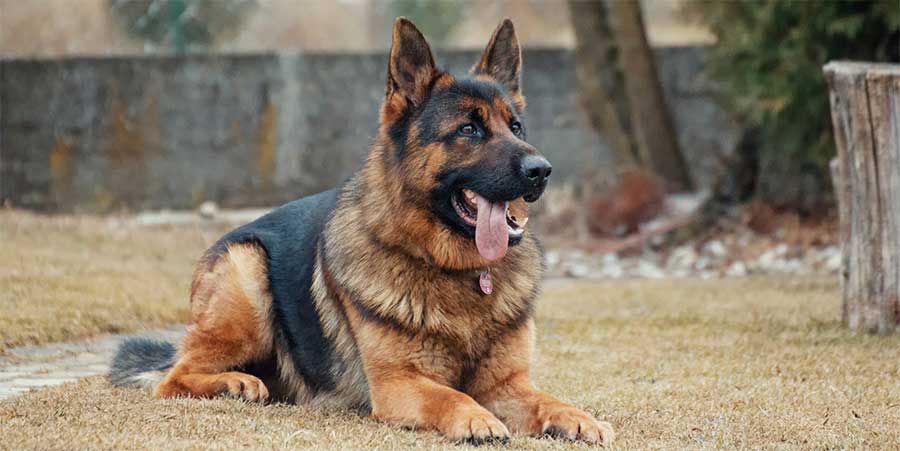 All police dogs must be experts at basic dog obedience. They must obey their handler’s commands without hesitation. This is what keeps the dog’s inherent aggression in check, and allows the officer to control how much force the dog will use against a suspect.

European dogs are given commands in their native language. It is not true that this is to minimize the chances of a person giving the “attack” command by accident. It is because it is easier to teach the officer a few words in the dog’s native language then to retrain the dog in English.

These dogs must make it through endurance and agility training. They must be able to jump walls and climb stairs. The dogs are also trained around noise and distractions. A dog that is nervous around people will not be a good police dog.

Dogs are trained to detect drugs and bombs because they are actually looking for their favorite toy. The handler begins training by playing with the dog and its favorite toy. Over time, the handler adds a marijuana (or some other drug) smell to the toy. The dog eventually starts associating the smell with the toy. The handler then hides the toy with drugs. When the dog smells the drugs he digs and scratches to try to get the toy. As soon as he learns that if he sniffs out the smell of drugs – then he is rewarded by play time.

The same process is used for bomb detection. However, bomb dogs are taught to alert by sitting. This is called a passive alert.

Potential Liability of a Police Dog:

If a police dog injures someone or causes damage, the police department could be liable for those damages as it would be for a human officer. The same standards are used for dogs and human officers in determining if the use of force is justified. The factors in determining justified force are how severe the crime is, is the suspect an immediate threat to anyone, and if the suspect is trying to run away or resist arrest.

The use of police dogs is increasing as police departments realize that a well-trained dog/handler team actually reduces liability. A K-9 team can often keep a suspect from resisting at all, and often end the situation before it escalates to the point that someone might get injured.

An officer with a canine partner had stopped a truck for a minor traffic violation, and sensed that the driver might be on drugs. Because the truck’s driver refused to let the officer search the truck, the officer led the dog around the exterior of the vehicle. The dog made movements that showed he smelled something suspicious on the driver-side door handle. Taking that as a signal that drugs were inside the truck, the officer checked out the interior, and found a stash of drug-making equipment.

Ultimately, the individual was convicted, but he still had the opportunity to argue that the officer had no justification for the search because the dog was not a reliable drug-detector. The Florida Supreme Court agreed with the challenge, and laid down a specific check list that police would have to offer to justify a search based on a dog’s “alert.” The Supreme Court said no to the checklist, and said there should use a common-sense approach, looking at all the facts and circumstances to see if the dog had been trained to do what the police claimed it could do.

A police dog was brought on to the front porch of Jardins’ home because police suspected there were drugs on the home. The dog “alerted” to the drugs and police used that to get a search warrant for the home. Drugs were found. Jardins argued that the use of the dog in this fashion was an illegal search under the 4th Amendment. The Florida Supreme Court said no. The United States Supreme Court overturned Florida’s decision and decided this was a search and probable cause was needed to get a warrant and NOT just the dog’s sniff.

The Supreme Court specifically said, that “[t]he investigation of Jardins’ home was a “search” within the meaning of the Fourth Amendment. At the Fourth Amendment’s “very core” stands the right of a man to retreat into his own home and there be free from unreasonable governmental intrusion.” The area immediately surrounding and associated with the home is part of the home itself for Fourth Amendment purposes. The front porch is the classic example of an area and the officers’ entry was not explicitly or implicitly invited. A police officer not armed with a warrant may approach a home in hopes of speaking to its occupants. But the scope of a license is limited not only to a particular area but also to a specific purpose, and there is no customary invitation to enter the home or surrounding areas simply to conduct a search.

There have been complaints filed throughout the United States alleging that some dogs are intentionally being trained to operate as so-called trick ponies, or dogs that provide officers false alerts for the presence of drugs, and may be profiling racial minorities in the process. A survey of primarily suburban police departments in Illinois, carried out by the Chicago Tribune, found that 56 percent of all police searches triggered by a drug-sniffing dog turned nothing up.

But, perhaps tellingly, that number jumped to 73 percent when the search involved a Latino subject — meaning that nearly three-quarters of all dog alerts on Latinos turned up no contraband. The study covered a two-year period from 2007 to 2009.

Police spokespeople say the numbers are no surprise, because dogs’ noses can sniff the residue of drugs on a person or in a vehicle long after the drugs have been removed.

It has been alleged that these dogs are being trained to alert their handlers by cues, instead of by picking up a drug’s scent by sniffing. When a dog gives a false alert, this resulted in illegal searches and seizures, including money and property.

Police dogs are in no way superhuman drug detecting machines, they are animals who give false alerts due to all sorts of outside stimuli, for example if you had a cat in your car the dogs are all but guaranteed to go crazy. Outside all the environmental stimuli which can cause the dogs to false alert, police frequently simply train their dogs to false alert on cue.

Even with the problems that the dogs some times cause – they are a valuable law enforcement asset.

It is important to have a criminal defense specialist with you when you are facing criminal charges. It is especially important when there is the added factor of the use of a police dog. Dogs are heavily relied on by police departments and it is important that your legal representation has a background in the intricacies of the law as it relates to the use of dogs. The attorneys at the law firm of Lewis & Dickstein have decades of combined legal experience in criminal defense work. We have handled numerous cases involving the use of police dogs. If you have questions or are facing, or will be facing, criminal charges please contact us at (248) 263-6800 or complete a Request for Assistance Form and one of our attorneys will contact you.