There is new legislation pending in Lansing that would change the penalty for underage drinkers caught possessing, purchasing or consuming alcohol in Michigan to a civil infraction, rather than a misdemeanor offense.

The sponsor of the legislation is State Senator Rick Jones.  He says he is presenting this potential legislation because prosecutors have told him that minor in possession (MIP) cases are clogging the court’s dockets as young people fight the charges.  “Young people have found that having a misdemeanor on their record prevents them from getting college scholarships, sometimes getting into college, and certainly it affects future job prospects”  said Jones R-Grand Ledge.

Under current law, a MIP first offense is punishable by a maximum fine of up to $100.  There can be additional conditions placed on an offender such as drug/alcohol testing and therapy.  A second offense MIP can lead up to a fine of $200.  If there is a probation violation there is a possibility of jail.

Senate Bill 332 would retain the fines but eliminate the threat of jail time or a permanent record.  A third offense would still be a misdemeanor crime punishable by a fine up to $500 and up to 60 days in jail, just like current law.

The change in the law is supported by the Michigan Criminal Defense Attorneys of Michigan (CDAM). 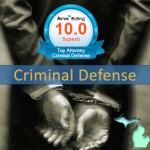 Testimony against the bill reminded the committee members that MIP’s were civil infractions once before in Michigan from 1978 – 1995 and they did not work in curtailing young people’s consumption of alcohol.  Bruce Timmons, testified that, “[d]istrict judges around the state complained that the civil fine sanction was ineffective and unenforceable.”  There was also a problem with many young people failing to pay the fines.